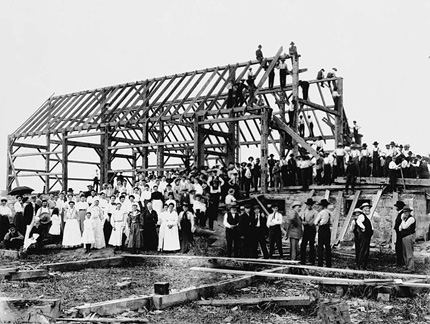 Like many cities and towns in many parts of the world, Hackney in east London is seeing a fair amount of change, as property developers move in, snapping up every disused building and ‘brown field’ site.

Our local council seem to be agreeing to every whim of these developers, and many people (including myself) are up arms about the loss of some of Hackney’s best vernacular architecture, usually to some poorly thought out, bland, brick box.

So far, so bad. On the other side of Hackney we are fighting to keep our beloved green spaces. Hackney Marshes, a delightful area for walks, wildlife, football pitches (well-known as a place where football stars of the future are found), is also under threat. Developers are desperate to start chopping up their parts of the bounty, with some illegal car parks already being planted on the site.

It’s not a unique problem I know. Who are we to expect to live in a city that never expands? London has always expanded. Back in 1500 this whole area was pasture land, a few stagecoaches and wagons coming through. Now every square metre is premium rental space.

1. People aren’t stopping having babies.
2. We all need to get to work.

Of course, the problem with all this is that the developers rip stuff down that we like, build cheap stuff we don’t like and know that people will have to buy the stuff we don’t like, because they also know about (1) and (2). Which in many ways I think is true. They are businesses after all. But recently I’ve seen a change in the way people are objecting to developers. They aren’t questioning the developers’ motives, they are questioning the quality of their proposals.

The locals want to leave buildings behind that their families will be proud to see, just as we adore those architectural treasures we find in London now. The rallying cry for those opposing the QEII development (link above), was not that it particularly shouldn’t happen, (we all knew it would one day), but that such a cheap appalling design had been approved by our council, Tower Hamlets.

And again, what does this do? Hundreds of people sign a petition to try and stop it and the council raise no objection, they don’t even ask for a review, or a single alteration. Where’s the quality? Where’s the thought? Where is the response to situation, surroundings, sympathetic materials? Where are the details that say in a building, ‘we didn’t have to do it like this, it’s quite expensive, but we thought we would do it because after all, this is built for future generations. Of course it isn’t anymore. A development round the corner from me has pretty much gone up in two months. Concrete pilings, poured concrete floors, metal window frames banged in, first fit on it’s way. First-time buyers already calling about completion dates. Not made to last, made as cheaply as possible and easy to knock down and replace in another decade.

We mistrust the council. We mistrust the developers. Locals don’t understand the new people moving in. The new people moving like the locals, (but really, they want to buy their houses, ‘have you seen those Victorian period details?!’). The people who have been here for years give in, sell up, maybe get a great deal on their house, but ultimately, they leave, diluting what was once a great community, leaving it to others to make their bit of money. Walking away.

It got me thinking.

What’s the opposite of all this? What inspires the people in a community? What draws them together. What sort of building would they all help to build in a common, universally admired form? A building put together buy a team, used for all different activities, but something that would sit in a green space and say to the developers, yes, ‘we know it’s not for you, but it IS for us. We live here and this is worth a thousand of your brick boxes’.

Then I thought you know what? Those Amish have it right. It would be great to raise a barn. It wouldn’t solve much, but it might bring back a little of the spirit of doing something for the community. Stripped back to an empty barn, we would be forced to think of what a space like this would be, could be, used for. Birthday parties, celebrations, a place to learn about nature. A place to learn how to make things. A place for the young to meet the old. A place for the young around here, to just enjoy being young.

(This post was inspired by looking at the woodwork of Tom Arrigo (he makes timber frames), and reading the books of Jack Sobon, (also recommended to me by Tom Arrigo).

I also thought the following paragraph from Wikipedia on ‘barn raising’ was substantially more exciting than any proposal I’ve seen from a London developer in the past decade.

A barn raising, also historically called a “raising bee” or “rearing” in the U.K., describes a collective action of a community, in which a barn for one of the members is built or rebuilt collectively by members of the community. Barn raising was particularly common in 18th- and 19th-century rural North America. A barn was a necessary structure for any farmer, for example for storage of cereals and hay and keeping of animals. Yet a barn was also a large and costly structure, the assembly of which required more labor than a typical family could provide. Barn raising addressed the need by enlisting members of the community, unpaid, to assist in the building of their neighbors’ barns. Because each member was entitled to recruit others for help, the favor would eventually return to each participant.