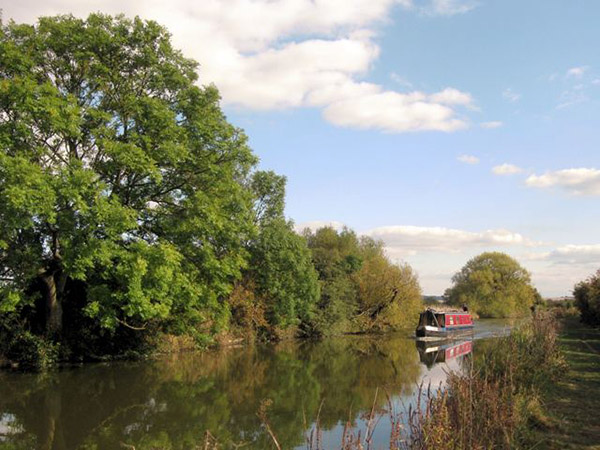 Despite the never-ending autumn and very mild winter, I’m looking ahead to spring and have started to sort out my fishing gear. In my youth, I was a member of Luton Angling Club and fished many a match on the Grand Union Canal, mostly on stretches through Leighton Buzzard, such as Grove Church and Slapton. I remember hauling in quite a few good bags of roach, perch and bream, with the ever-present gudgeon making up the weight.

As much as the fishing itself, it was wonderful to get to the canal so early when the day has yet to warm up and a boat or two starts chugging through. I’m no longer in touch with most of my fishing buddies from those times, but now I’m in my late 40’s, I find myself once again drawn to fishing, perhaps these days as more of an antidote to some aspects of modern life. The same focus I find in woodworking, I also find in fishing.

Back when I was match fishing, we all used waggler (floats) and the conventional rod and reel. Some of the better-known anglers switched to the european ‘pole’, which meant a long (usually 13 metre) carbon pole which meant you didn’t have to cast a line and float. The long pole meant you could drop your hook in exactly the right spot without casting. The line was fixed directly to the end with a length of elastic to take out some of the snap when you struck a fish. The longer poles are dismantled in sections when you have a fish on and you take off the lower sections as you draw the fish in closer.

I’m quite keen to try this out and might take the plunge on a decent pole if I end up fishing a lot more, it’s an interesting technique. While I was looking around on the internet, I found some great information about canal fishing around Hackney and the River Lea that winds through it. The main course of the river was different when the Lea Navigation first opened in 1770. The navigation actually used a backwater of the River Lea up to the old Tottenham lock, where the different river channels merged again. This backwater is now the main course of the River Lea through east Hackney and Clapton. The navigation, which is actually a canal in appearance, goes north from Hackney all the way up to Hertfordshire.

Some info I found on the ‘London Roach Pole’.

Many anglers think of the pole as an invention of the 1970s. Most are shocked to learn that thousands of pole fishermen were lining the towpaths of the Lea Navigation, Regents, Hertford Union and Grand Union Canals 150 years or more ago.

The true London roach pole began its life in early Victorian times. Yes, it’s true that Izaak Walton used a roach pole long before, but his was fashioned from wood from trees, instead of cane. Nonetheless, it was a pole in its crudest form and old Izaak caught plenty of roach from the River Lea in Hertfordshire using this early pole.

The early 1800s saw many changes in the piscatorial art. The great capital city was a hotbed of angling and nine out of every ten anglers in London fished mainly for roach. Originally called Lea roach rods, the early London roach poles started at 14 feet. With the arrival of brass and wooden reels and drop ringed rods, they were referred to as poles, so that a distinction could be made between shorter roach rods and the longer roach pole. 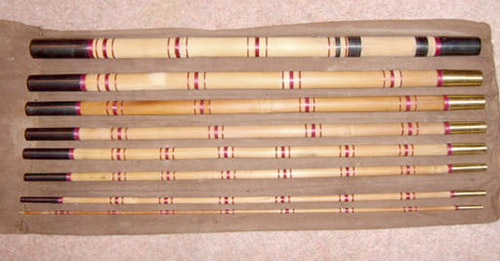 London had many fishing rod makers scattered around the city, and some did make poles, but the leading pole makers were based in East London.

The two most renowned pole makers were T.H.Sowerbutts of Commercial Street, Shoreditch and Charles Evans of Green Street, Bethnal Green. These were followed by E.L.Sowerbutts of Ruby Mews, Walthamstow, who was to become the last man in London to manufacture roach poles.

Although roach poles started at 14 feet, they were eventually produced as long as 24 feet in length. Early Lea poles had four joints. Later, the longer poles had mainly five but sometimes six joints. All the sections fitted inside the bottom two. The butt section was made from Tonkin cane, mahogany, ash or pine. The next three joints were produced from white Carolina cane. All of these bottom four joints were hollowed out, to allow everything to pack away. The top joint was two pieces of Tonkin or bamboo, spliced into each other and a tip of greenheart, lancewood, whalebone or split cane was spliced in.

Ferrules were brass or nickel silver and unlike a rod, the female ferrules were level with the cane and had a brass liner inside the cane to facilitate wear. This was referred to as a brazed joint.

There were two end caps or stoppers to stop the joints coming out and the butt had a cap that was engraved with the maker’s name. The engraving on some poles is in a beautiful flowing script.

Finally comes the traditional black whipping. The whipping was often in a pattern that is known as a thick and two thins. These whippings are spaced at regular intervals all the way up the pole, making the pole look both unique and stunning. To the tip of the pole was tied a small length of silk line known as “topping”, which had a small loop at the end.

Early fishing lines were originally made out horsehair. This later changed to drawn gut and then after the war to nylon. Floats were made of bird quills of varying types. Floats made from feathers of crow, porcupine, goose and peacock quills all featured in the poleman’s armoury.

There was one other quill float that was unique to London. This float is known as the London taper quill or tip capped float. It consisted of two pieces of tapered quill that had pointed ivory or bone tips inserted at each end. Then the two pieces of quill were joined and bound with silk. They were produced from the period 1850 through to 1900 and there were only three men who were able to produce them. The last of these men was Mr Bazin of Hackney and his floats are generally considered the best. His floats are extremely rare today; they are known to exchange hands for £150 or more at auction! 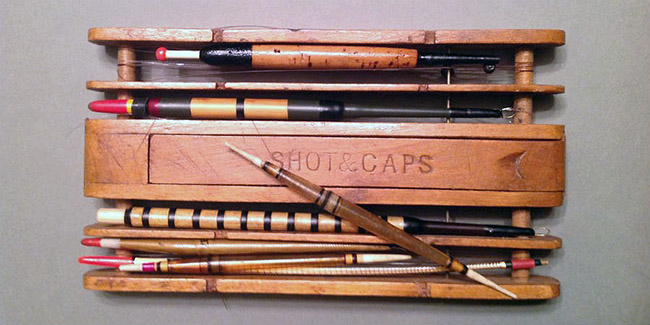 The poler kept a wooden line-winder with up to four casts with hooks, shot and floats on it. He would choose the most suitable for the peg to be fished. By simply unwinding the cast and tying it to the loop at the end of the topping, he could be fishing in minutes. Among the baits available for the pole angler in the 1800s, bread paste was the most popular. This was fished in conjunction with a groundbait of mashed bread and bran. A small ball of groundbait was squeezed around the bottom shot and lowered in at the head of the swim. This practise was known as cupping.

The final piece of the poler’s kit was the black box or ‘throne’. This served as both seat and tackle carrier, often bringing back the days catch as well. It must be remembered that these were the days of no keep-nets and freshwater fish of various species fed many hungry families. Even fish like gudgeon were a popular dish.

The pole angler was often referred to as a ‘banker’, because he only fished from the bank, but other names were ‘artist’ or ‘magician’. Magician, because he had the ability to strike at a movement of the float that nobody else could see, and artist, because he could bring roach after roach to the net with an inimitable style.

So, why was the pole such a popular method with London anglers, and why were they sometimes banned from Fenland and Midland matches? Firstly, because of their length, the angler could hold his float out over weed beds and ease his float along their edge, the tip of the pole following just 18 inches above.

When the float dipped, it was just a twist of the wrist and another redfin was on its way to the bank. Fishing in this way, not many bites were missed. The London polers became speed machines and those who fished a running line had great difficulty matching their speed on the Fens.

Sundays on the towpaths on the Lea, Thames and London canals saw large numbers of anglers all fishing with their poles. As the quill dipped, the cockney cry of “got yer” could be heard along the bank as another roach came to the net. 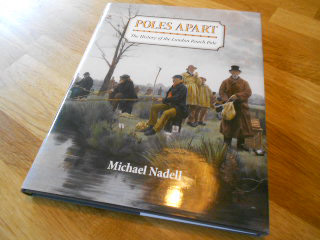 If you would like to know more about London’s pole fishing history, Poles Apart: The History of the London Roach Pole is now available from Coch- y- Bonddu Books. It’s a tremendously interesting read for anyone who is interested in the origins of pole fishing as we know it today.

This information is taken from the Canal & River Trust site, which can be viewed here.

The cane that was used in poles was also used in normal float rods. There is a great piece on fishing with a cane rod on the great ‘Fallons Angler’ site.

There is also a great video of a traditional float maker called Paul Cook,right here. Worth a watch. (Some stills from the video are shown below).

One element of my fishing tackle that really needed upgrading was my seat box. The last one I had was a wicker one (!), yes, I managed to even bypass the later plastic box that everyone used. There used to be a company called Brilo Box in Lancashire who made some fantastic sweatboxes. They used to custom-make them with whichever combination of drawers you wanted. There were made from sheet aluminium, bonded I believe with something like a Sikaflex adhesive. They had some rivets too, but not too many, as Brilo wanted to stop water ingress. The drawers were wooden. After hunting for ages on eBay, I finally scored a nice one. 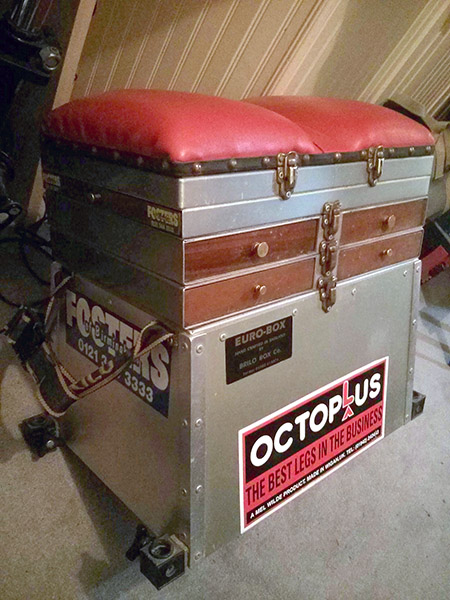 Sadly, Brilo are no longer going, but I would very much recommend their boxes, worth snapping one up before the only options are cheap plastic imports.