These are some great videos made by Quansheng Xin, (thanks to a helpful reader of the blog, see below for link). In one of his earlier videos, he made the big sign that now sits behind him on every new video he makes. The way this chap does his work is very instructive and I find his direct methods very refreshing. He does go on a bit, but then, don’t we all.

Nearly there with the door. Coat of primer yesterday, then will move on with glazing. fitting locks, etc. Looking good I think. I need to decide on a topcoat colour. Black would be easiest choice and may well win out, as time is pressing on.

I have no idea whether I’m doing this correctly, but it all seems to be going ok. By all means send me tips on how to do this better, or ‘right’. I value the opinions of full-time joiners who do this for a living, especially traditional hand tools workers.
Right, I had a bit of time between the plasterers, electricians and plumbers in the house, so onwards with renovating this old door. 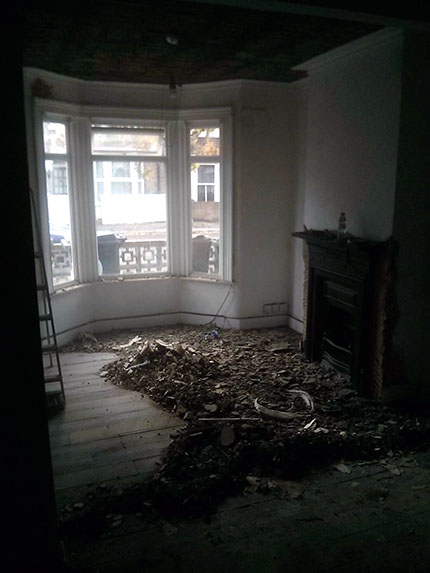 The work on the house renovation continues and this morning I had to strip off a ceiling. The old plaster and lath had had it’s day, (well, it was over 130 years old) and was sagging in quite a few places. As the plasterers have been in skimming the walls, it made no sense to skim over something with dodgy foundations. So down it came and ten bags of rubble later, I’m ready to get it boarded over and skimmed.
I spent a while stripping the ceiling, because I wanted to retain the original cornice, so I had to part the ceiling from the edges, before swiping the main part off with a shovel.
A very dirty day, but still some progress. Once these two rooms are skimmed I can get on with the kitchen renovation and once that’s done, it’s really just painting and making storage units.
Onward and upward.

I’m still crazy busy on a house renovation, but one of the projects I’m shuttling back and forth on is sorting out a new front door. The property is a mid-terrace Victorian two-bed, built in 1880. I found a decent door in a reclamation yard locally, for a very reasonable £80.
The current hallway in the house suffers a little from being too dark, primarily because the existing front door has only one tiny fanlight with glass panels.
This new four-panel door will be converted so that the top two panels will hold glass (and a lot more light) into the hall.
I will be fitting frosted safety glass for security reasons and for privacy, and will post more detail about mouldings and fitting as I get round to it.