I’ve bought and sold hundreds and hundreds of vintage woodworking tools over the years (my shop will be online very soon, just sorting out Paypal integration), and I’ve seen many craftsman-made tools in that time. Most usually they are made by pattern makers who perhaps didn’t want to pay good money for a tool they could make themselves, or sometimes they are just made by a craftsman who wants the challenge of making the tool as good as the original.
Colin Sullivan got in touch with me and sent these pictures over. I’m keen to see more examples of tools made by individuals. The work on this particular plane is as good as any I’ve seen.
Copy and words below from Colin Sullivan

I have been interested in Mitre planes and bevel up planes for years and when I injured my left hand index finger I was worried I would not be able to make things. During the few days I had off from work I decided to start making the plane shown.

It is exactly the same size as a Stanley no9 block plane with a few of my own ideas added including S/Steel. The blade angle is 22 deg. with the bevel up as the no9. The cap iron is from a Stanley no.4 transitional plane – because it is a bit longer than a normal one and almost the length of the no.9. The front infill knob is screwed to the adjustable part of the sole to allow a little adjustment to the mouth. The blade adjustment is controlled by turning the rear knob which works well. This proved so sucessful that I felt I could make a more accurate copy of the no9, and this is shown in the 3 pictures below. 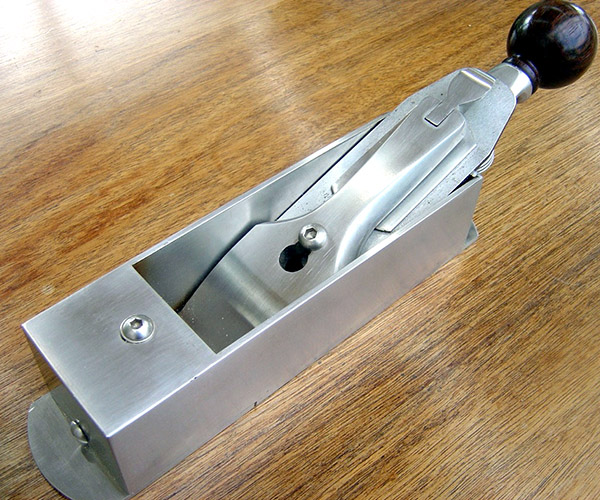 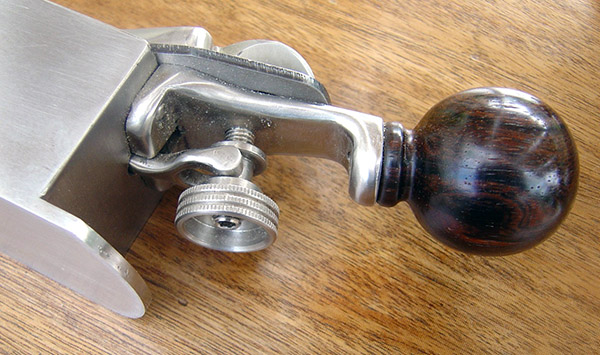 I made this copy of a Stanley no.9 Cabinet makers Block Plane a few years ago. A friend had an original one that I carefully dimensioned and made a working drawing. I am a collector of American Stanley tools and this plane is top of my list for desirability, but because they fetch so much in auctions I decided the only way I would get one was to make it! When I was in business making spiral stairs we used stainless steel a lot on balustrades and stringers etc. It is the perfect material for making some tools because there is no chance of it rusting, it is not as difficult to work as people make out if you approach in the right way.
I cut out all the parts for this plane with the angle grinder using the new very thin cutting blades, you can buy-they are amazingly efficient and only 1mm or so thick. The box part is made up from 3mm s/s plate- welded together round a wooden block and cleaned up with the angle grinder and 120 grit soft discs. The cap iron is made from 10mm plate and is not bent but straight- tapered of at one end and longer than the standard ones. The blade is 3mm thick form Clifton Tools and holds an edge well, the mouth is adjustable and in fact made that part of the plane easier to make. The adjusting wheel I turned on my old lathe using a 8mm Allen grub screw for the thread which is right hand on these planes. The blade adjusting lever is the most difficult bit to make and get working properly.
The bracket that houses the adjuster and rosewood handle is made from angle s/s with a plate welded to it where it meets the plane, just the same as the Stanley. The polished finish was done with flap wheels in the pillar drill after the angle grinder, and the sole lapped on plate glass with fine sand, from a children’s toy I seem to remember. The bolts are all Allen type because it is a new tool and I have not tried to pretend other wise. It works very well and well worth the time it took to make much admired by every one I show.
I do have the drawings still if any one fancies having a go I can pass them on. This was my first attempt at making a low angle block plane in S/S, it works well.