Back in September last year, I had the pleasure of visiting a wonderful violin shop and its restoration workshop called Bridgewood & Neitzert.
If you look at the slideshow, you will see the superb cabinet work of Michael White. I asked Gary Bridgewood for more information about Michael and how he came to meet him. His response via email was such a lovely portrait of Michael that I asked if I could reproduce it in full. Gary’s email is below, with some pictures he also kindly forwarded to me.
I started this blog because I wanted to show the work and skill of proper traditional cabinet makers, joiners and woodworkers like Michael and I hope to connect with many more like him. 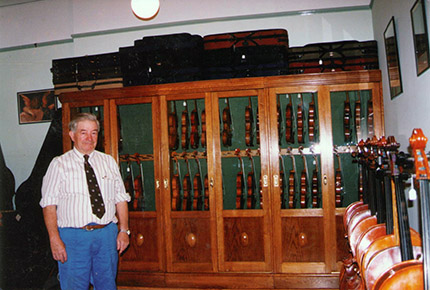 Michael White made all of our cabinets, sadly he died nearly three years ago, and he is terribly missed. He worked with us for 18 years. It’s quite an interesting story, an artist friend asked me to help her deliver a painting she had made of a woodworker. She had been commissioned to paint the inside of a lid for Micks tool cabinet. Mick lived in the Goswell Road in a tower block on the 14th floor. His tool cabinet was truly incredible. 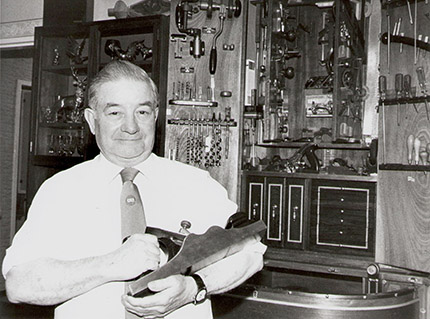 He had started out as an apprentice at Cubitt’s, I think in the Grays Inn Road. He was a sea cadet and involved in D-day but as a skilled woodworker was conscripted to stay repairing London during the blitz. The cabinet was about 8 feet high with another bell shaped cabinet below, which had a pull out section made of exotic woods. He had inlaid the old three penny coins around the edge. He had never finished adding to it and amending details, it was truly a superb piece of work. My artist friend painted Mick planing some wood with his tool cabinet in the background. 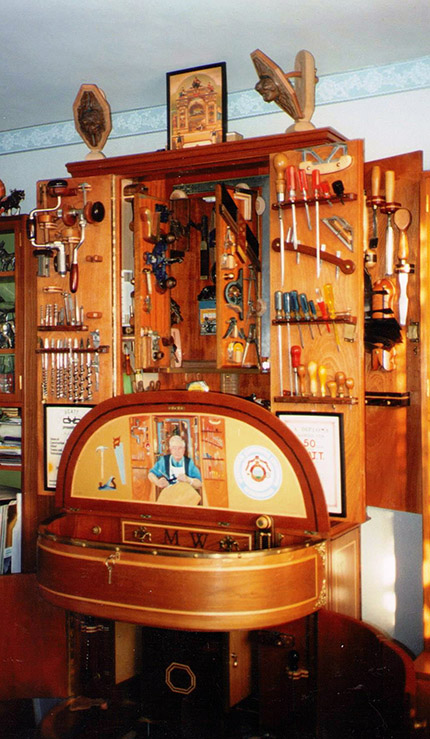 We got on very well and Mick was very interested in violin making, which I was doing a lot more of back then. I invited him to come and visit and said if he ever wanted to use any of our machines in our basement he would be very welcome, as they rarely got used.
I didn’t see Mick for about 6 months when one day he arrived in his best suit at our door. After tea and a good look round he was ready to leave and once again I offered use of our facilities, Mick said he’d think about it. About four months later Mick arrived in his work wear and asked me what I wanted doing first! I was quite taken aback and said why he hadn’t brought his own work; Mick said he’d prefer to help us first. Anyway this conversation was to be repeated for the next 16 years, only towards the end when Mick was not well did he decide to finish his cabinet and the last job was finishing the pull out section with carousel which was full of drawers and hanging sections which had a handle in the top and could be removed when working on site. I supplied Mick with pieces of ebony, rosewood, and quilted ash and of course violin maple for the drawer fronts, it was spectacular when finished. 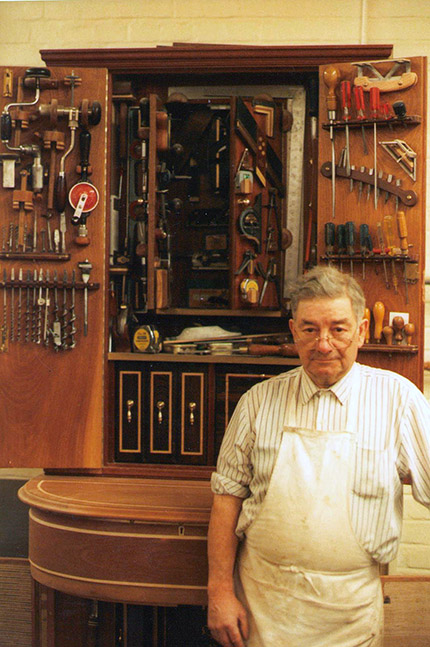 Mick kept finding things to do and useful places to make a cabinet or shelf to maximise storage, his last project was our violin/viola/cello case display cabinet which was finally finished and installed by my friend Hugo. 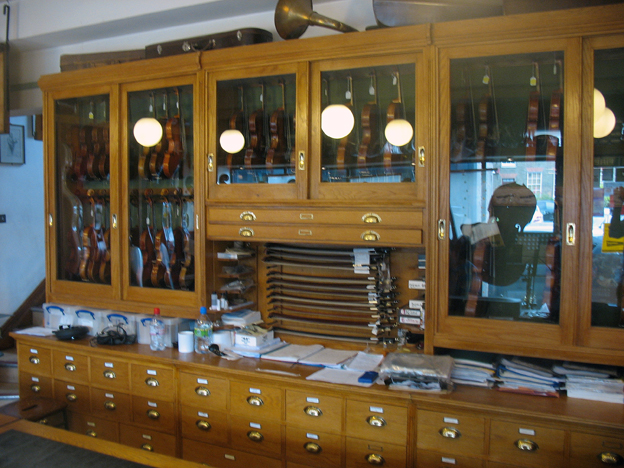 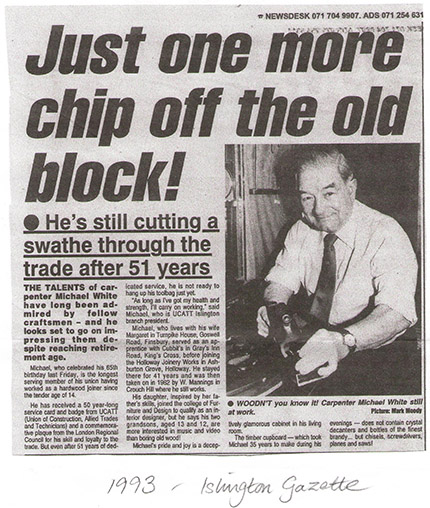 Mick told of his master whose name I think was Spirro, he trained at the Vatican and Mick said his training was not only woodwork but carving, gilding , drawing/painting and stone work, his apprenticeship lasted 16 years! Mick was lucky enough to train under Spirro at Cubitt’s. He also told many, many stories. One was for one of the old carpenters who worked at Cubits whose tool chest doubled as his coffin and was kept at the end of his bed.

This is an interesting article, I thought Cubitt’s wharf and workshops was where Dolphin Square is now, perhaps they subsequently moved to Gray’s Inn Road? A few years ago I worked on the sashes at Apsley House (No 1 London), they were made by Cubitt in the 1860s, it was like working on the sash window equivalent of a vintage Rolls Royce.