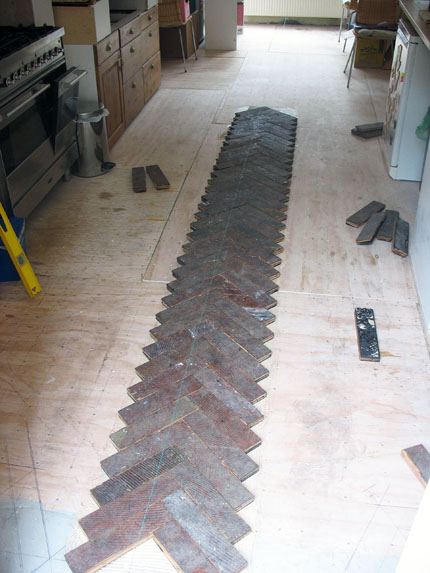 Apologies for the lack of posts recently, but as well as having a day job, I’ve been cracking on with laying a parquet floor in the kitchen.
If you’ve never done it, I would definitely say have a go. Like most things connected with woodwork, it’s really all a case of spending a while on preparation.
As I’m laying onto bare floorboards, I’ve screwed 9mm ply down with 25mm screws on 5″ centres, (it really only needs to be 6″ centres, but the floor was a bit wavy). After that you go round the perimeter of the room and mark out 10-12mm from wall. (This is your expansion gap in case the wood moves and will in any case be covered by the skirting when it goes back on).
Then mark out two block widths for the perpendicular ‘ribbon’ of parquet that will run around the edge. All the other parquet is laid first on the floor in herringbone fashion and when you get to the inner line, (two block + 10mm away from wall), that’s as far as you glue up to. The glue is a specialist product which bonds very well not only with the ply sub-floor, but also with the remains of the bitumen on the backs of the blocks.
Once you’ve covered the floor in your herringbone pattern, use a circular saw to cut back to the glue line and lay the outside perimeter blocks. It’s then just a question of sanding, sealing etc.

The blocks are tongued and grooved, so laying them isn’t too hard. Just watch for creep with the pattern running out of true either way. I sighted with a string line, which is essential really. The first course takes a day or two to dry, then subsequent courses should be easier as I can tap blocks up to the ‘soldier course’, knowing they are true.
More soon no doubt. 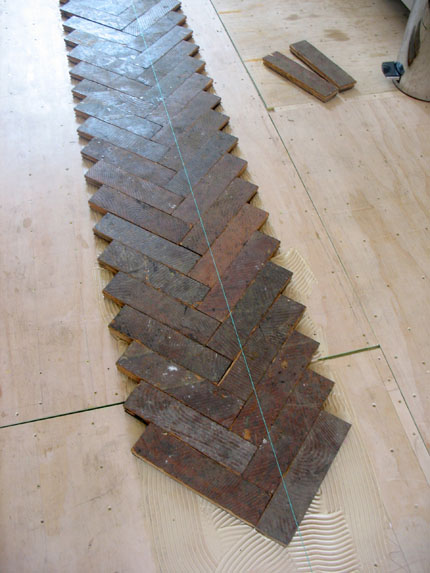 4 replies on “Laying a parquet floor”

I’m about to tackle the same! Really interesting read, and such an interesting tip regarding trimming the outer edge and then filling in the boardet! Interested to read more. Kind regards. David

Thanks David. Yes, I’ve had a couple of full days since then and most of the main floor is covered, bar the borders. I’ll do some more shots soon. The blocks are 3″ by 12″, so I’m drawing a glue line 6″ (2×3″), plus a 1/2″ for expansion. All around the room I therefore have a 61/2″ inset, which a lot of blocks go over, but crucially the glue underneath doesn’t. When I trim, the outlying blocks should be easy to pop off. As I have some radiators to work around, I’m going to belt sand some of the border blocks before fitting, as sanding after is a right pain and with similar jobs, (albeit using an orbital sander), I’ve come close to nicking the water pipes! More soon.

David, I am undertaking a similar task. We are extending the back of our dining room and kitchen and knocking through. the new extension and kitchen will have a concrete floor and will be level with existing floorboards in the original house. The floorboards had been previously sanded. do you think it will be ok to go over the original floor boards or should I board out as you have. I will of course be sanding the boards once down with a floor sander. Thanks, Paul

Hi
I’m just about to start a similar project, the reclaimed blocks are now cleaned and im starting to lay next week. My main question is about edging: we have a window seat and 2 cabinets built in which do not have skirting board. How do i go from the part of the wall that has skirt to that part? should i just lay flush against it with no room for expansion?