Not feeling I’d done quite enough to lose my (already too few) readers, I’d thought I’d post an update on the thrilling parquet job I’m doing in my kitchen. As you might remember from the last post’s cliffhanger, I had laid the soldier course and was waiting for that to dry.
Well, it dried.
Ok, so then it’s just a case of filling in with successive rows, in the herringbone fashion. The job is made easier by the fact you can tap blocks up to the dry line of blocks, giving you a reference, however, you do have to watch that you don’t get ‘pattern creep’, with small gaps rapidly becoming larger as the line gradually shifts on the wet glue. 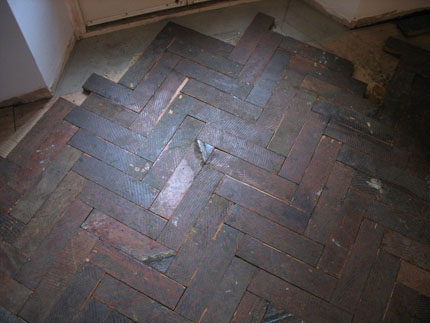 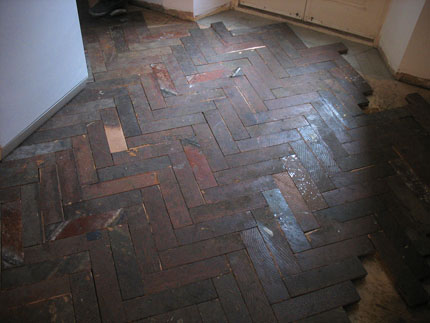 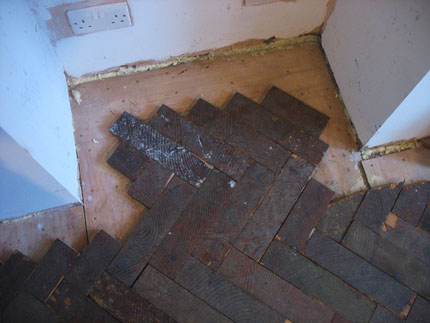 If all goes well, you’ll find you will approach your perimeter ‘glue line’ around the edge of the room. When placing the last blocks, only glue up to that line, although the blocks will overhang. This will be trimmed off later. Remember, two blocks width and 10mm extra. You will find small discrepancies in the block sizes, they are reclaimed after all. If you get gaps of say, 2-3mm, don’t worry, you can fill these during the sanding and sealing process by mixing glue with the sawdust that comes from the sanding. You can also fill most of the depth with a sliver cut from another block, then fill with the glue/sawdust mix. However, if you’re getting gaps of 4-5mm, take the blocks off and try again. Quite often I could see a problem developing with gaps, but then a slightly narrower block bought me back into line.
I’ve now covered most of the main floor and am now taking both ‘zigzags’ left out through two door thresholds. When they are both dry, I’ll lay another string and line the two up to run another soldier course straight down the hall to work off.
Stay tuned for more gripping adventures.