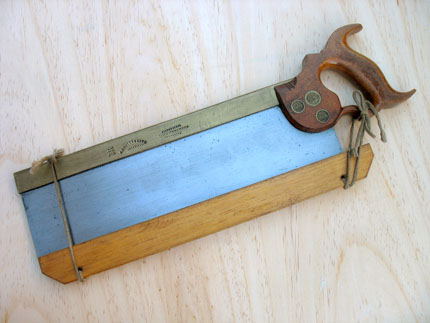 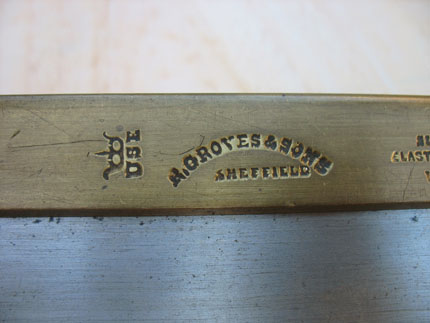 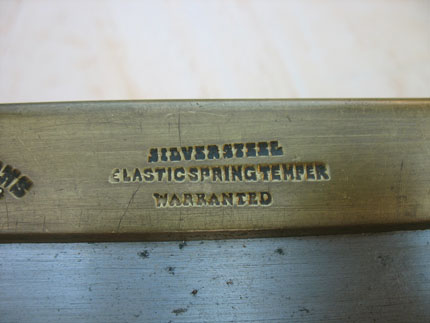 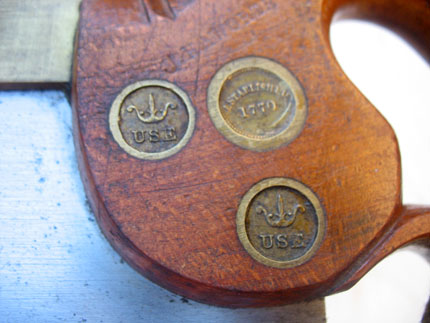 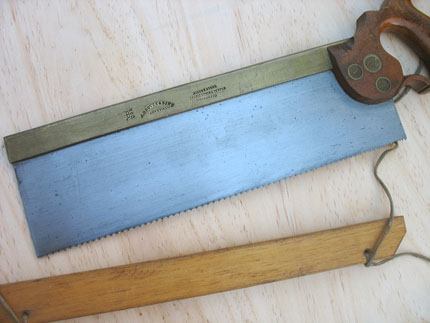 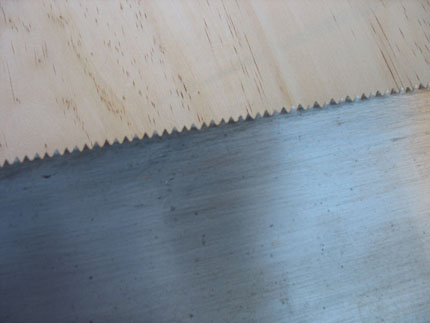 I have no saws, but came across a pair of scissors stamped r. groves sheffield, with also stamped H.M.GOVT. Kind regards Jeanne Bradley

I have recently inherited a Richard Groves 10″ dovetail saw which belonged to my grandfather, then subsequently to my late uncle who, when I told him back in the 1970s that I had read up on saw sharpening, (I am a machine tool engineer by training) asked me to sharpen it for him. I remember the teeth being in such a mess that I topped it completely, then refiled it to 16 tpi by working directly from a 12″ engineers’ steel rule.
The back had been hammered down at the toe, leading me to think it was a tapered blade and thinking how attractive it looked! It is, in fact, slightly tapered but only by about 1/4″.
The blade has a slight ‘ding’ about 1″ up the front (toe) edge, but it is more readily felt than seen. Never having done any ‘panel beating’ I am very reluctant to start hammering it for fear of causing more damage. I don’t think it will affect the performance.
The handle fits my hand ‘like a glove’ and is by far the most comfortable handle it has ever been my pleasure to hold, so much so that I have started to remodel another old handle to as near the same ‘feel’ as I can. It is absolutely wonderful. I have also started hunting for more of these wonderful saws.

I have a knife set, which has a wood like handle could it be bone….it was my Grandfathers, he own a store in Richmond Hill north of Toronto Canada……
in the late 40’s also ran a Post Office …..

It has the stamp of the family name

I recently inherited one of these R Groves & Sons hand saws. It’s also stamped ‘Made For J. Sime&co Falkirk

Inherited one of these saws. Miketupper805@gmail.com

Hi Mike, can I get more info please? Are you selling a Groves saw? Thanks, Gary

This comment section doesn’t seem to work very well.I have a 10″ blade Richard Groves back saw in good ( but used) condition. Blade is slightly loose in the handle; handle in excellent condition. For sale.

I have a garage sale find and would like information if any is available. The saw plate says R. Groves & Sons in an arch below the name is SHEFFIELD above the name is a symbol. The saw has 3 nuts of the spanner design. The button was 1 1/8 inch but unfortunately is missing. The handle is beautifully made and I think original as is has some damage and resembles the 1800’s Disston handles. The plate is 30 inches long. I do not think this saw has ever been used or at least never resharpened. I am not sure who is strong enough to use it though as this is 4 TPI if you measure point to point. The plate also has that nifty little nib on the top end of it. Sorry if I have described the saw poorly as I am a novice and just looking for help. Thank you very much for your time and help.

I just found one R Groves & Sons saw + another of similar age and make, different maker, while cleaning up my late grandparents’ estate. They’re in decent condition, I think. Can send pictures if you’re interested. Email me at jessloveswords@gmail.com

When did R Groves & Sons start using ETCHINGS rather than impressed stamps on their handsaws , and start thinning to the back ?

Hi I found a Hunting knife & leather sheath 8 3/4″ with stacked leather handle black and red with brass ring in it, brass guard, aluminum pummel, full tang, 4.5″ blade with fuller serrated on top about 1 3/8″ etched Use R. Groves & Sons LTP Sheffield England. Any information would be helpful.

Hi I got one of these saw its got two screws one has the use with the crown on it .lovely wooden handle and the other marking is use with crown .R grove and sons then silver steel elastic steel temper warranted.i live in new zealand . I like this little saw and it’s still got all its teeth .just thought I would share with you .

Hello. I have a Richard Groves and Sons handsaw, ripsaw I believe, that is labeled Sheffield on the blade. It has the USE medallion and the handle is mounted with split screws. The overall length is 30 1/2 inches with a 26 inch blade. To the right of the stamp on the blade it has Cast for Warrant. That is probably not complete as I cannot make it all out. I would appreciate any info you could give me on value, age etc. Thanks in advance.

Found it after the death of my grandfather in his closet. What is this knife, help me find out. I am in Russia.
alagerevt@mail.ru

Hi, I just acquired an 8 inch dovetail saw. Beautiful open handle with two split nuts. Stamping is identical to the one you have in the picture. Plate is straight but teeth are a little dull. Can’t decide whether to sharpen and keepor passit on to someone whohas to have it.