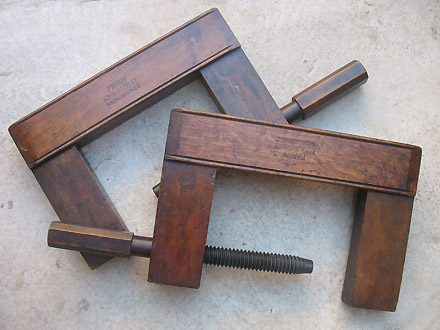 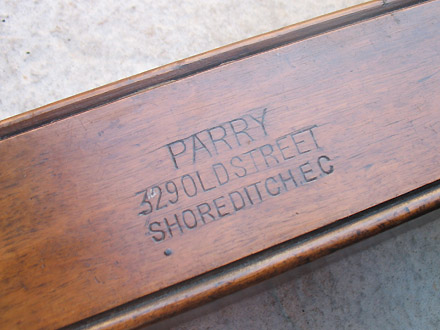 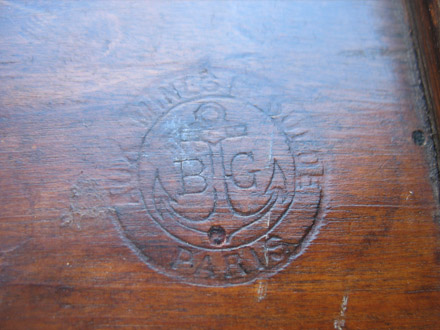 Im sure you will get many a reply, Parry was indeed a tool merchant in London,
The cramps where most definately made by the French company along with many planes and drawknives,
there are some collectors of their tools.

I myself will be hoping to see a few replies back to yourself with more information.

“Aux mines de Suede” is French for “From the mines of Sweden”, surely referring to Swedish steel. They were a French tool company.

This site (in German) has a few more details:
http://www.holzwerken.de/museum/hersteller/auxminesdesuede.phtml

Similar clamps (but less ornate) are common in Sweden — I love them!

My relative was from London and he started off as a cabinet maker. Then later worked for pinewood studios building folm sets. His name was James Francis Henry. Sadly passed away may 2013. As I am a joiner he left me some of his tools. I came across a tennon saw with parry and son ltd. 329 & 333 old street e.c.1 warranted. Thaught I would research it and I found this site. Might be of some use. Or if you had any more info. Thanks. Glyn Davies. .

Thanks for the information. As I understand it, Parry was a tool seller on Old Street, and was actually trading until quite recently, maybe up to the 1970’s, as several people I’ve met remember the place. As for what it looked like, I have no idea. When I have more time I will visit the new Hackney Archives in Dalston and try to find some photographs.

I trained in 1971 and visited Parry’s for a number of years afterwards.

A deep tunnel like shop wit counters on the left hand side.

Thanks David, I wish I could find some photographs of the shop somewhere. Big fan of your work, thanks for visiting.

i worked as a joiner just of chatsworth road hackney (elder field road)in the early 1980,s my first bag of tools were bought in the Tyzack shop, my memory is of it being in old street ,just the other day a friend of mine gave me a wooden try plane,seen the parry stamp on the iron blade,and has made me look at other wooden planes i have, to also see the same name parry old street EC1.

I live very close to Chatsworth Road. It’s seen the gentrification of Hackney and sadly lost a lot of
it’s interest. When we bought a house here seven years ago, first thing we did was go for a walk around
the streets and we had a drink in ‘The Elderfield’ to calm our nerves and worry about our new mortgage.

I would love to find some pictures of the Parry shop, I’m not sure where I could find any.

All the best
Gary

Gary,Stumbled across your message regarding Parrys . I worked at 329 Old Street from 1965 to 1972 and ended up managing the retail side of the shop . knew lots of names of people who worked there and I must say it was probably the best working years of my life !!!!! Now 68 and retired !!!!!
Best Regards.Bob

Bob! So great you found the site, and thanks so much for posting a note. Any chance you might have some pics of the shop I can put up on the blog? I’ve heard so much about Parry’s now, but I arrived in the east end after it was closed. It would be lovely to see some pics if you have any, or if you know anyone who has? I can scan them in and return them. Please let me know if you have any good stories to tell, you can email me on mail@hackneytools.com. Thanks again for getting in touch, we should have a cup of tea sometime!

I have purchased from a car boot today a G Clamp the stamp on it says S Tyzack & Son not Sons address 343 & 345 Old Street Shoreditch ec it looks a lot older than the G Clamp above I wondered if anyone knew how old it is ? There is a couple of more tiny stamps on it one says DCMO Can’t make the rest out , then there’s a circle nothing like the one above its writing of some kind inside around the circle , How much should I be asking for this ?
Thank you in advance for any info you may have .
Regards Elaine

I worked at Parry’s 1952-1957 The manager was a Mr Gilson tough but fair. I was behind the sales counter but also was involved estimating tool list for export and occasionally packing for dispatch .Joyce Cohen was in the office,went to her wedding she married a Harris(my surname)but not related.very interesting job had to leave due to moving to Essex.

Sorry for the very late reply. I have a Parry’s woodworking machine catalogue from 1969/1970 that belonged to my late father who was a regular customer. According to the catalogue at this time they had a showroom on Old Street (325-329 & 333) with entrances on both Old Street and Hoxton Square (40). They also had another showroom and their “works” at Biggin Hill in Kent. The catalogue includes a photograph of the Biggin Hill showroom exterior, an interior shot of the “private cinema” and a number of shots from an exhibition held at Olympia. Sadly I have no way to reproduce them here. The catalogue also claims that Parry’s were at the time of writing Britains largest woodworking and machine tool supplier, the main distributed for a variety of well-know tooling manufacturers (Wadkin, Wilson, Harrison etc) as well as the sole agents for “the famous American Black and Decker DeWalt Power Shop range”. I do hope this has been of some interest.

Have bought a beautiful parry and sons sundial saw bench this evening .. in good working order. Even have pamphlet’s from new and hand typed instruction leaflet. This machine cost £24.10.0d new. Am wondering how many of these are left. This one is serial number 2413. Seems possibly to be a very early example. Any thoughts? Phil K.

I’ve got a sundial heavy duty universal woodworker type mjs with Parry & son on it. Anyone know the age ? John ( Dingle)

I mourned the passing of Parrys, and so many other London shops. I still treasure their hardback catalogue. I too have a Sundial bench SB 505, which the Swedes and then the Czechs copied.

Hi
I thought i would post a “before and after” of the Parry and Son shop at 329 Old Street, the former picture is from the mid fifties and the google is
from 2020. It’s not progress !

I have just been given a sundial bench saw serial no 1020 needs a bit of TLC but in good condition just about to start stripping it down. Any body got any pics of what they looked like when new, reason is it has no table.

I have inherited some wooden planes from my uncle, two of which have my Great, Great, grandfathers name stamped into them. One is from Parry & Son.
Looking in the British Plane makers book I cant find any reference to Parrys, and body have any details please.