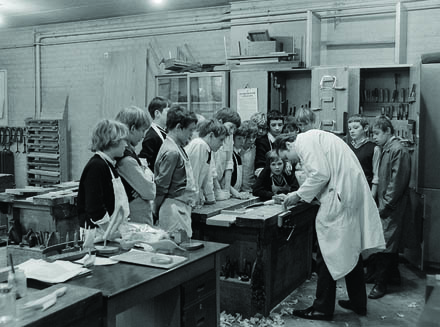 This week, I’ll be going back to school, well, university to be exact. I’ve decided to finally get back to doing something I enjoy, rather than devote 100% of my time to designing for publishing.

And so life is dividing itself a little. My Fridays will now be spent at London Metropolitan University, with a small group, devoted to learning the craft of furniture and cabinet making, something I’ve become fascinated with in the last couple of years.

It’s ridiculous of course! People are living in smaller houses. They don’t have big money to spend on handcrafted furniture. They have faster-changing tastes, brought on by the rise of advertising and consumer culture. The ‘need’ has been surpassed by the ‘want’.

And you know what? I don’t care. It’s not about making things to sell. I’ve been heartened by folks around me who have re-discovered the value of learning a craft and enjoying the process, rather than racing to the end product.

And so, as the one reader of this blog will already be aware, I’ve been amassing old tools, quality tools from British manufacturers, some of whom sadly don’t even exist anymore. I’ve been introduced by friends to people who produce the most amazing work, old fellows who have so much knowledge, hands that have been making things all their lives.

It’s also been enlightening, when I mention building a tool collection and starting my learning process, the amount of people who talk so openly about relations or friends who were in the business. ‘I think I still have some of his tools in the loft!’.

So Friday I start learning all over. Somehow scraping a living from this may, or may not come later. It might become a part of my life, it may not. For the time being, I’m just enjoying having a new challenge beyond life in front of a computer.

2 replies on “Back to school”

Top banana, looking forward to seeing the results. When I used to do Airfix models they always ended up caked in glue.

Well done you. I want to see the results too!