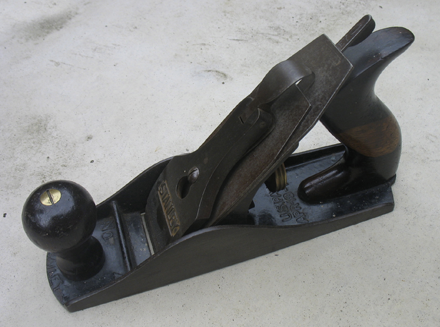 This is the standard Stanley plane, designed by Leonard Bailey, of Boston Massachusetts. This one is a ‘No.4’, and sits in a middling position on the size scale, from the diminutive ‘No.1’, through to the large jointer, the ‘No.8’. I’ll soon be posting a some more detailed info about Leonard Bailey, and his association with Stanley as a separate page. In the meantime, I’ll stand on the shoulders of giants, and point you to the wonderful website of Patrick Leach, Patrick’s Blood & Gore. If you’re looking for information about Stanley tools, Patrick’s website is an absolute must-read.

Patrick’s earlier career was in software. He developed an interest in woodworking early on, and now admits to being a ‘self-confessed tool fanatic.
He has an enviable knowledge of Stanley, and other well-known makers.

A proportion of my own small tool collection is made by Stanley, and it’s becoming something of a mission to build a complete set of Stanley USA-made ‘Bailey’ planes, numbering 1 through to 8. Recently I managed to find my first Bailey, (which is a number 4), from a private sale on the web.

The casting in the base of the plane takes a lot of stress holding the frog, which in turn holds the blade, chipbreaker and lever cap. Consequently, the method for holding the frog was constantly being revised by Stanley and was the focus of many new patents. Previous to the design shown, the frog was seated on a flat bed with machined grooves, but in 1902 this new design was introduced. The frog has support from a cross rib and centre rib, and also support on its leading edge from the casting, as well as being held by the two bolts. Planes of this period have ‘PAT’D/MAR-25-02/AUG-19-02’ embossed into the sole of the plane.